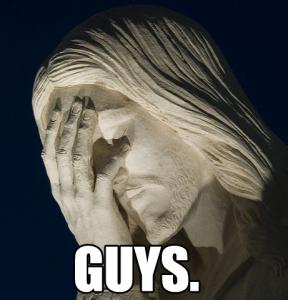 As the US bishops gather in Baltimore this week, I have to admit that I’m so weary of people saying that “the bishops can’t police each other. They have no authority over each other.” Of course this is true, but it completely misses the point.

Why in God’s name (literally) do you need a formal canonical/juridical structure to act like a basically decent, functional human being?

Let’s be honest.  If any other minimally sentient carbon-based life-form saw a colleague doing something illegal or unethical, they wouldn’t need a formal, legal structure to publicly call them out, appropriately shame them for their dereliction of duty, and challenge them to fix it or get out. Social pressure/fraternal correction is a perfectly legitimate cultural intervention that is readily available to the bishops BUT THEY DON’T USE IT!

How many bishops called out “Uncle Ted” despite his behavior being an “open secret” for over 20 years? And even after all that, how many bishops have publicly called out Malone for his gross dereliction of duty in Buffalo? Why not? Because episcopal culture has made an idol out of saving face and making nice. It’s as if the motto of every bishop on the planet is “Not my circus, not my monkeys.”   How does that square with Ezek. 39:8?  “If I say to the wicked, ‘O wicked man, you will surely die,’ but you do not speak out to dissuade him from his way, then that wicked man will die in his iniquity, yet I will hold you accountable for his blood.”

Look, if the bishops would just act like basically human, more-or-less socialized, kinda-normal-ish people (much less, witnesses to the gospel), who were capable of occasional expressions of (perfectly appropriate) righteous outrage, we wouldn’t need any “policies” or “canonical structures.”  They would handle things the way any other family handles a brother, or nephew, or second-cousin-twice-removed who was acting like an idiot.  You don’t have any legal authority over those people, but–except in the most dysfunctional family–that doesn’t stop you from hunting him down and telling him that he can either get his stuff together or you and the rest of the family are going to make him miserable until he does. And that doesn’t stop you from continuing to make noise until something gets done.  That’s how healthy families work. They exert appropriate social pressure to maintain basic order and healthy functioning.  That’s what true fraternal correction looks like.  That’s all the “authority” you need.

The USCCB’s debate about juridical structures and canonical procedures is a perfect example of Chesterton’s dictum about small laws. The bishops, failing to follow the basic, unconscious rules that govern the social interactions of every other human being on the planet kvetch that they don’t have enough small laws to tell them what to do.

Ugh. Give thou me a break.

You don’t need new laws and structures.  You need a dose of humanity and an infusion of basic decency.

…And thank you for coming to my (Uncle) TED talk.