The following article is part of our ongoing series on the Liturgy of Domestic Church Life.  To learn more, join our Facebook discussion group:  CatholicHŌM (Households on Mission)–Family Discipleship. 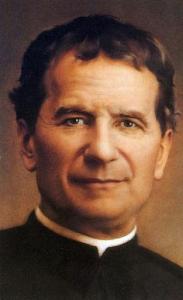 discipline.”  This loving-guidance approach to childrearing is largely inspired by St. John Bosco’s work with children. He wasn’t a parent, but he was a great Christian teacher and the founder of a religious order (the Salesians) dedicated to helping and educating children. Many of the students St. John Bosco taught were homeless or delinquent. At the time, people believed that children in general—and these kids in particular—were little better than animals who responded only to physical punishment and harsh correction.  One day, the Blessed Mother visted St. John Bosco in a vision. She told him that children should be corrected, “not with blows, but with sweetness and charity.”

Deeply moved by this vision, St John developed a system of discipline he called The Preventive System in contrast to what he considered to be the heavy-handed “repressive system” of his day. He taught his followers that even the most willful, defiant children would offer their heartfelt obedience if they were treated with love and respect.  He argued that Christian discipline shouldn’t just be about getting kids to behave.  It had to about evangelizing children in the way of love and virtue.  He said that his method…

consists in making known the rules and regulations…and then supervising in such a way that the students are always under the vigilant eye of the [caregivers], who like loving fathers will converse with them, act as guides in every event, counsel them and lovingly correct them, which is as much as to say, will put the [children] into a situation where they cannot do wrong.

St John Bosco never wanted to lead his students into temptation. He preferred to focus on teaching children what to do and then supporting their success as opposed to ignoring children until they misbehaved and then punishing them after-the-fact. The Preventive System forms children’s characters through “reason, religion, and loving-kindness.”  Regarding the harsh punishments popular in the day, the Saint famously said, “To strike a child in any way…should be absolutely avoided, because…they greatly irritate the young, and they degrade the educator.”  In this, he echoed the sentiments of another great saint, St. John Chrysostum, a “Doctor of the Church” (an official Church title given to saints whose teachings are especially important to understanding our faith) who said, “accustom (your child) not to be trained by the rod; for if he feel it…, he will learn to despise it. And when he has learnt to despise it, he has reduced thy system to naught.”

In many ways, Discipleship Discipline, like Don Bosco’s Preventive Method that informs it, is just as much a model of family spirituality as it is a means of getting children to behave.