The following article is part of our ongoing series on the Liturgy of Domestic Church Life.  To learn more, join our Facebook discussion group:  CatholicHŌM (Households on Mission)–Family Discipleship.

– – –
On our radio program today, we got a call from a gentleman who accidentally offended his wife of 20 years by saying that if he had the relationship he 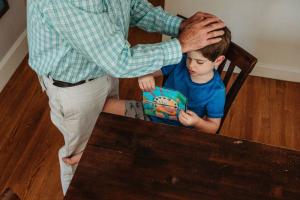 has with God now when he was coming out of high school, he might have become a priest. He said that his wife, upon hearing this, felt like she was some kind of consolation prize.  Of course he didn’t mean it that way.  He said he just meant that he was a little envious of the opportunities a priest has to live so single-mindedly for God and that he sometimes struggles to experience God as deeply as he would like with all the distractions of daily work and family life.

Of course he isn’t alone.  I think most faithful lay people have felt this way from time to time.  I think most faithful Catholics–men and women–feel a similar call to “priesthood” at some point. What most people miss is that this genuine and authentic call to priesthood isn’t necessarily a call to the ministerial priesthood.  For most of us, the call to priesthood is a call to more deeply live the ministry of the “common priesthood,” but frankly, for a lot of Catholics, this feels like “second skimmings.”  That’s not because the common priesthood is any less important in the Kingdom of God, but because we haven’t effectively developed the theology of the common priesthood and what it means to celebrate it .

Theologian, David Fagerberg, points to this complementarity between the lay and ministerial priesthood when he writes,

What’s the Liturgy of the Common Priesthood?

I would argue that our understanding of the value and dignity of the “common priesthood of the laity” has suffered for so long because we’ve been attempting to talk about it without adequately defining the Liturgy of Domestic Church Life to which it is inextricably attached.  Building the Kingdom of God doesn’t necessarily require us to “do BIG THINGS for Jesus”  like building hospitals and converting entire nations to Christ. For most of us, building the Kingdom of God simply requires cooperating with grace to heal the way sin damages our relationships. The common priesthood facilitates this necessary and essential process of healing through the Liturgy of Domestic Church Life.

Loosely speaking, it’s the role of the common priesthood to build and heal the Body of Christ while it is the role of the ministerial priesthood to feed the body of Christ.  And although Catholics haven’t historically tended to think of it in these terms, both roles are of equal importance and dignity. Seen through this lens, creating strong families through the Liturgy of Domestic Church Life isn’t just a nice thing to do.  It is the primary way the common priesthood of the laity participates in the salvific mission of the Church.

Similar to the way that the ministerial and common priesthoods represent distinct yet complementary means of participating in the one priesthood of Christ, the Liturgy of Domestic Church Life should be thought of as a true liturgy that is distinct from, yet complementary to, the Liturgy of the Eucharist. Of course, the relationship between these two liturgies is enhanced by the fact that they are the only two liturgies where love, itself, becomes incarnate in flesh and blood—the former through the conception of children and the latter through the consecration of the Precious Body and Blood.

Dr Greg Popcak is the author of many books and the director of both CatholicCounselors.com and the Peyton institute for Domestic Church Life. You can hear him and his wife Lisa each day on their call-in radio program, More2Life airing Monday-Friday at 10amE on EWTN Radio and SiriusXM130.