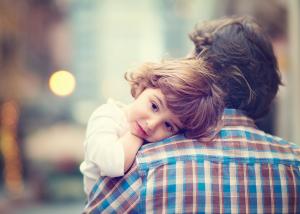 As parents, we often want to protect our children from negative encounters or situations that we experience in our adult lives. But is this the best approach? New research reveals that kids may know more about how we feel than we might think.

A study conducted at Washington State University Vancouver evaluated mother’s and father’s interactions with their children after experiencing an anxiety inducing event (such as public speaking with negative feedback from the audience). The participants were separated into two groups, one group was told to suppress their emotions in front of their child while the second group was instructed to act naturally.

After the negative event, the parent’s were given a task to complete with his or her child that required the parent and child to work together as a team.

The researchers found that the parents who suppressed their emotions had less positive and less efficient encounters with their child than those who acted normally and shared their negative feelings with the child.

One researcher stated, ““The act of trying to suppress their stress made parents less positive partners during the…task. They offered less guidance, but it wasn’t just the parents who responded. Those kids were less responsive and positive to their parents. It’s almost like the parents were transmitting those emotions.”

Moreover, this study showed that when parents suppress emotions the children became more sensitive to the parents, particularly to their mothers.

Researcher, Dr. Sara Waters, continued by saying, “Kids are good at picking up subtle cues from emotions. If they feel something negative has happened, and the parents are acting normal and not addressing it, that’s confusing for them. Those are two conflicting messages being sent.”

The results of this study show that it is more beneficial for parents to share their experiences with their children. Allowing children to see the full trajectory—from beginning to resolution—of a conflict teaches children how to regulate their own emotions and learn that problems can get resolved. Waters says, “It’s best to let the kids know you feel angry, and tell them what you’re going to do about it to make the situation better.”

This statement by Dr. Waters demonstrates the parenting technique of Modeling that we discuss in our book Parenting with Grace—The Catholic Guide to Raising (Almost) Perfect Kids!

For more parenting tips and information, check out Parenting with Grace and tune in to More2Life, weekdays at 10am E/9am C on EWTN, SiriusXM channel 130!