Conrad Black, for failing–despite your obvious intellect–to bestir yourself to read a single book on Catholic sexual ethics, YOU are the Dumbass of the Day.

Sadly, the National Review has taken leave of the remains its senses and published a rambling essay on the need to overturn Humanae Vitae by Conrad Black, who, besides being Sirius’ older, less Catholic, and more sesquipedalian brother, would appear to be leaning on his extensive experience as a biographer of dead presidents (FDR, and Tricky Dick) as evidence of his authority  to lecture the Church on contraception.  Well, why the hell not?  Everybody else is doing it. Why shouldn’t an overblown, walking dictionary like Connie take a crack at it too?

Now, far be it from me to criticize the size of a man’s…vocabulary, but truth be told, Black’s apparent penchant for utilizing grandiloquent verbiage where a more prosaic lexicon would suffice is simply bedeviling.  Frankly, his literary posturing unnecessarily increases the opacity of his preternaturally inebriate points by an order of magnitude that is inestimably superfluous.    If you know what I mean.

But if you don’t have the patience (or hipboots) to wade through both pages of Black’s voluminous logorrhea, here is an English translation of his thesis.  “Hey, Churchy-dudes, get with it!  Nobody agrees with you on this whole contraception dealio.  Your opposition to the pill makes you look like cavemen.  Mix it up with that whole pervy-priest thingy and you end up making it really hard for me to admit I’m Catholic to all my ‘Piskie friends at the club.  I mean, they just started letting papists like me in last week!”

Well, hells bells man, why didn’t you just say so?

I know that both  Mark Shea and Simcha Fischer have already had a little fun at Mr. Black’s expense, but as the author of Holy Sex! A Catholic Guide to Toe-Curling, Mind-Blowing, Infallible Loving, I couldn’t restrain myself from joining the virtual pigpile.  (Note to Conrad, maybe you should take some time to read my book before you pen your next idiotic missive on morality.  I know you can read.  In fact, you’ve apparently fellated every page of the OED.)

To all my regular readers, my first response to Black’s nonsense is, ” Don’t say I didn’t warn you.  And what?  Did it take about 3.5 seconds to prove my point?  And this from an allegedly conservative publication.  But pardon me for a moment while I turn my attention to the object of this post.

Conrad, bubbeleh, let’s talk.  You graciously admit that you are “not qualified to discuss…the theological arguments involved.” (Although that doesn’t stop you from accusing the Church of, “joyless behavioral philistinism.”–Ouch, buddy.)   Well, that being the case, allow me to take a moment to exercise a spiritual work of mercy and instruct your ignorant ass.

First, read this.   Although it’s about celibacy, it applies to your point about the Church needing to get with the times.  Here’s a taste…

…it’s the Church’s job to look as little like the world as possible so that we can tweak your conscience, make you think twice, get under your skin.  We MUST be different because we, quite literally, are called to irritate the hell out of the world.   The more the Church does any of the things you want it to do, the less it functions as Church and the more it becomes some benign social club.  But be honest.  You’d love that wouldn’t you?  Because you’re tired of the Church making you think twice about questions you can barely stand to think once about. (Seriously, go read the rest of it.  It’s good stuff if I do say so myself.)

Second, just FYI,  the Church cares so much about sex because families are made through sex and families are the building blocks of civilization.  Just try to build a civilization around the rights of the individual, corporation, military, state, or even a church and see what you get.  (I’ll make it easy: anarchy, company stores, juntas, communism, and the taliban, respectively).  That’s why the only just society is the society that takes as its foundation the traditional family because, as a social unit, the traditional family is both small enough to care for the needs of the individual and large enough to promote the common good by preventing rampant individualism.

The thing is, since familes come from…(wait for it) having sex (shocking, I know) and society is made up of families, if you get sex wrong, then your view of family gets screwed up and, by extension, your view of civilization becomes disastrously wrongheaded as well.  Getting the meaning and purpose of sex wrong is a bit like NASA launching a rocket that is just a half-degree off target.  It doesn’t look like that big a deal up close, but 60 million miles later it starts to add up.

The former New Yorker editor, Peter Devries, once quipped that “The miracle of marriage is not that adults produce children, but that children produce adults.”  If that’s true, then the misery of contraception is not so much that adults fail to produce infants, it’s that adults become infantilized.    Contraception teaches us to treat sex as recreation, fertility as a disease, and children as parasites. A society founded on such “principles” is a culture of narcissism, a culture where marriage becomes obsolete, and the murder of the least becomes a virtue.

Look, I understand the Church is unpopular on this issue, but you’re a smart guy.  All it would have taken you is about 15 minutes of reading to at least understand the Church’s point of view.  I don’t even expect you to agree with the Church, but it would have been nice if you gave some evidence of understanding it’s reasoning.   It’s just sad that you think that the whole point behind the Church’s teachings on sexual morality is that it wants to “avoid trendiness and pandering.”  In the words of the social philosopher, Seth Myers, “Really?!?  Conrad Black?  REALLY?!?”

As we’ve already observed, you know how to read. Why could you not bestir yourself to read anything about this topic?  Surely, a biographer such as yourself knows the value of researching your subject.  No?  Well, God help the readers of your biographies if this is what you consider responsible authorship.   So, Conrad Black, that’s why you get the Dumbass of the Day Award.  Because a smart guy like you doesn’t have the right to write such lazy excrement.  Congratulations, Dumbass. 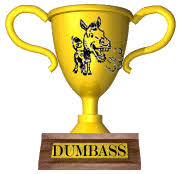 —Dr. Greg Popcak, is the author of over a dozen books including  Holy Sex!  A Catholic Guide to Toe-Curling, Mind-Blowing, Infallible Loving.